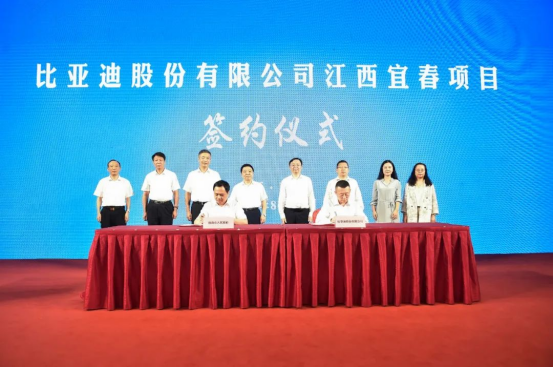 Taken together, the total battery capacity disclosed by BYD has reached 470GWh. Of course, this does not include BYD’s unannounced new battery production bases.

The accelerated pace of production expansion reflects the “tightening” of BYD’s production capacity. In 2022, BYD’s sales will continue to hit a new high. From January to July, the cumulative sales volume of BYD’s new energy vehicles was 803,900 units, a year-on-year increase of 292%; the cumulative installed capacity of power batteries and energy storage batteries was approximately 41.329GWh.

Moreover, BYD has recently announced that it will enter the German, Swedish, and Thai markets, and officially launch overseas markets. It can be seen that the installed capacity of BYD’s power batteries will further increase rapidly.

However, in addition to supplying for its own use, BYD is also approaching many external car giants.

The latest news is that on August 10, a person familiar with the matter revealed that the blade battery supplied by BYD has been delivered to Tesla’s super factory in Berlin, Germany. According to teslamag.de, the Model Y with a BYD battery with a capacity of 55kWh and a cruising range of 440km has received EU type approval and is known as Type 005, internally referred to as “variant Y7CR”.

In addition, BYD has started supplying car companies including FAW Group’s Hongqi and Pentium models, equipped with blade batteries, with an order volume of about 15GWh, and shipments will begin in April 2021; and Ford Motor’s Mustang Mach-E, equipped with Ternary high nickel 811 battery.

Not only that, according to the incomplete summary, Ford, Toyota, PSA Group, Daimler Group, Dongfeng Group and other car companies will soon use BYD batteries. The specific information is as follows:

Toyota: At least six models, including pure electric and HEV, not limited to blade batteries.

Daimler Group: Various models of the EQ series are equipped with ternary batteries and blade batteries.

Dongfeng Group: A variety of new energy models are equipped with ternary batteries and blade batteries.

In addition to battery production capacity, the construction of battery raw materials and the mining, selection and development of lithium ore cannot be ignored in this BYD Yichun project. This is also the key reason why BYD chose to settle in Yichun.

Yichun is known as the “Lithium Capital of Asia”. It has the world’s largest lepidolite mine, with lithium oxide reserves as high as 5 million tons of lithium carbonate production, and the recoverable lithium oxide volume accounts for 31% of the country and 12% of the world. Investing in Yichun BYD can facilitate the acquisition of upstream lithium resources and reduce production and transportation costs.

This time, BYD’s establishment in Yichun is also another global new energy leading company to settle in Yichun after Ningde Times and Guoxuan Hi-Tech.

Since the beginning of this year, BYD has accelerated the expansion of its lithium resources investment layout. Veken.com Lithium has made an inventory of BYD’s foreign investment in the lithium battery industry chain, as follows:

Lithium mine and lithium salt layout

Salt Lake shares hold a 51.42% stake in Lanke Lithium, which is a lithium extraction producer from the largest salt lake in China, Chaerhan Salt Lake (West Mining Area). As of the end of last year, Salt Lake’s lithium carbonate production capacity was 30,000 tons, and a total of 19,200 tons of lithium carbonate were sold that year.

Rongda Lithium, a subsidiary of Rongjie Co., Ltd., owns the overall mining rights of the world-class resource Meika No. 134 vein, and is the only large-scale mine producing spodumene that has entered the supply channel in China; its subsidiary Changhe Huali’s battery-grade carbonate The lithium production capacity is 3000 tons/year, and the lithium hydroxide production capacity is 1800 tons/year.

It is worth mentioning that in early June, it was reported that BYD had found 6 lithium mines in Africa, and all of them have reached acquisition intentions. In response, BYD declined to comment.

1. Hunan Yuneng: In December 2020, Hunan Yuneng increased its capital and shares and introduced its main customer BYD as a strategic investor. It is the seventh largest shareholder of the company, with a direct shareholding ratio of 5.27%.

2. MCC New Energy: In September 2017, MCC Group joined Hefei Guoxuan, BYD and Caofeidian to develop and establish MCC Ramu New Energy Technology Co., Ltd., holding 51%, 30%, 10% and 9% of the shares respectively. In April this year, the four parties increased the capital of MCC New Energy, and the shareholding ratio of each shareholder remained unchanged.

3. Sichuan Road and Bridge: In October 2021, BYD strategically invested in Sichuan Road and Bridge with an investment of 200 million yuan. Sichuan New Lithium, a subsidiary of Sichuan Luqiao, has launched projects including cathode material projects and precursor projects, of which the cathode material project has been officially put into production in 2020.

Anode material layout: In June, BYD invested 100 million yuan in Griffin by way of cash contribution, and subscribed for Griffin to increase its registered capital by 15.6 million yuan.

Griffin is the operation platform of the carbon materials business segment of BYD supplier Dow Technology, and has built 40,000 tons of slurry and related supporting capacity.

Lithium battery copper foil layout: On February 23 this year, Tongbo Technology underwent an industrial and commercial change, adding a new shareholder, BYD, with a shareholding ratio of 3.11%, making it the seventh largest shareholder.

Lithium battery solvent layout: On June 10 this year, Zhongrun Chemical underwent an industrial and commercial change, adding a number of shareholders such as BYD. BYD’s shareholding ratio is 2.54%, making it the seventh largest shareholder.