However, in the release news, there is no

Performance parameters, such as energy density, volume utilization and other key information. According to the calculation of the project cycle of general battery system development, in the patent search system, we searched all the relevant patents related to battery systems applied by Yiwei Lithium Energy in the past year.

Among them, there is a patent titled “Power Battery Modules and Vehicles” with the authorization announcement number CN 215988999 U. Personal speculation is very close to the 46 large cylindrical battery system scheme actually used by Yiwei Lithium. The core information in the above-mentioned patents is now refined as follows:

▲Schematic diagram in the patent 1

1) There is no detailed description of the specific model of the cell, it may be 4680, it may be 4690, and it may be 46105. If the number of cells shown in the patent is the real number, the 46 series Pack contains a total of 864 cells, and each 48 cells and a serpentine cooling tube form a small block unit.

▲Schematic diagram 2 in the patent

3) Regarding the way of fixing the cylindrical cells in the box, the way described in the patent is quite different from that of Tesla. Tesla’s method is: firstly, two rows of parallel cylindrical cells are first glued to the cooling plate through acrylic resin quick-drying glue, and then the small blocks formed are loaded into the plastic bracket.

According to the module production process described in the Yiwei Lithium Energy Patent, first of all, the fixing of the serpentine cooling pipe depends on the water pipe slot on the bracket as shown in the figure below, and then the cell is clamped into the cell mounting bracket. In the card slot, finally, the thermal conductive structural adhesive is poured to fill the cell and the cell, the gap between the cell and the serpentine cold plate to ensure the fixation of the cell, and at the same time, the heat generated by the thermal runaway of the cell can be transferred out. , to prevent thermal diffusion caused by heat accumulation. If the actual case is as described in the patent, compared with Tesla, Yiwei Lithium Energy has less steps to fix the battery cell and the serpentine cooling plate.

▲Schematic diagram in the patent 3

In addition to applying for the patents described in this article, Yiwei Lithium has also applied for many other patents on the application of 46 series large cylindrical cells, including an interesting patent. Patent name: A cylindrical battery module and battery pack, the patent describes another arrangement of the 46 series of large cylinders in the battery box: laying down, not what we have seen so far, whether it is special or not. Sla is also a vertical arrangement of other homes. The advantage of this is that it can further make more space for the Z-direction avoidance of the entire vehicle.

At present, the development of 46 series large cylindrical cells and battery systems in the industry is in a hot stage. The picture below shows the current situation of domestic and foreign battery companies and car companies deploying large cylindrical batteries. 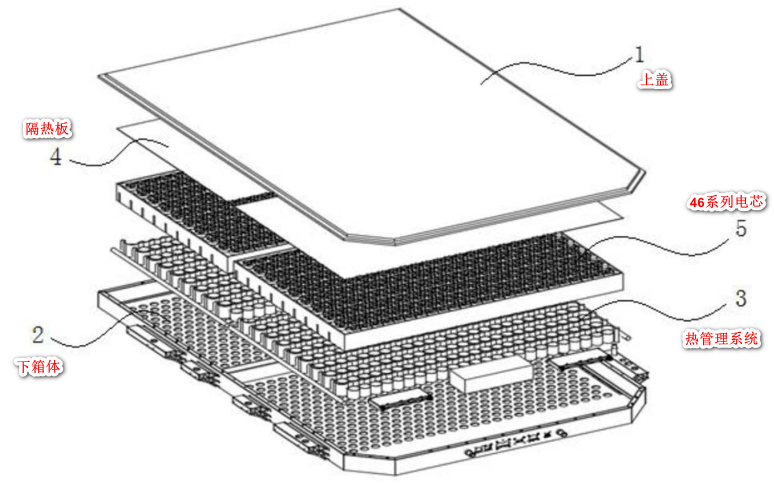 ▲A list of the layout of the large cylindrical battery

With Tesla as the leader in the development and application of 46 series large cylindrical batteries, later followers all rushed to the large cylindrical series to improve group efficiency, reduce the difficulty of BMS control, and can use high nickel and carbon silicon anode materials. The original intention was to develop the 46 series battery system. In the field of typical square-shell batteries, we have seen the domestic battery market in the past three years, and the extreme micro-innovations in system structure, thermal management, and thermal runaway protection solutions among major companies.

Similarly, I have reasons to believe that: with the successive release of 46 series large cylindrical battery system participants products at home and abroad, in the application field of 46 series batteries, although all are 46XX large cylindrical batteries, it should be possible to see different manufacturers in the future. Different 46 series battery cell layout schemes, as well as different 46 series battery system thermal management, thermal runaway protection and structural schemes. Some of Yiwei Lithium’s patents described in this article are just a typical representative of this field. Team members from CATL , BYD , OPTIMUMANO etc, We are familiar with the chemical characteristics of the battery cells, as well as the electronic technology of bms, and then through the scientific structure, assemble into the high-efficiency storage lithium battery required by the market.

Whether you are a lithium battery distributor, or we provide lithium batteries for your products, we all hope for a long-term cooperation. What we do is ap,ply their research to the market,in Better quality at lower price.